Many months in the planning, a 5am start on a cold Sunday in January, a long journey, and littered with incidents that might have suggested otherwise, this turned out to be my most prized location adventure so far.

After the first few months of simply flying my new drone in a field behind my cottage here in Devon, I summoned the confidence to let myself loose on the wider aerial world and cast my net a little further for inspiration.

I’d learned pretty early on in my thirst for knowledge, that both Google Maps & Earth were invaluable tools for location scouting, access knowledge and how to get to the destination in the first place. Start Point lighthouse had been on my radar for months. It looked spectacular, was relatively close by, and easy to get to. Or so I thought… 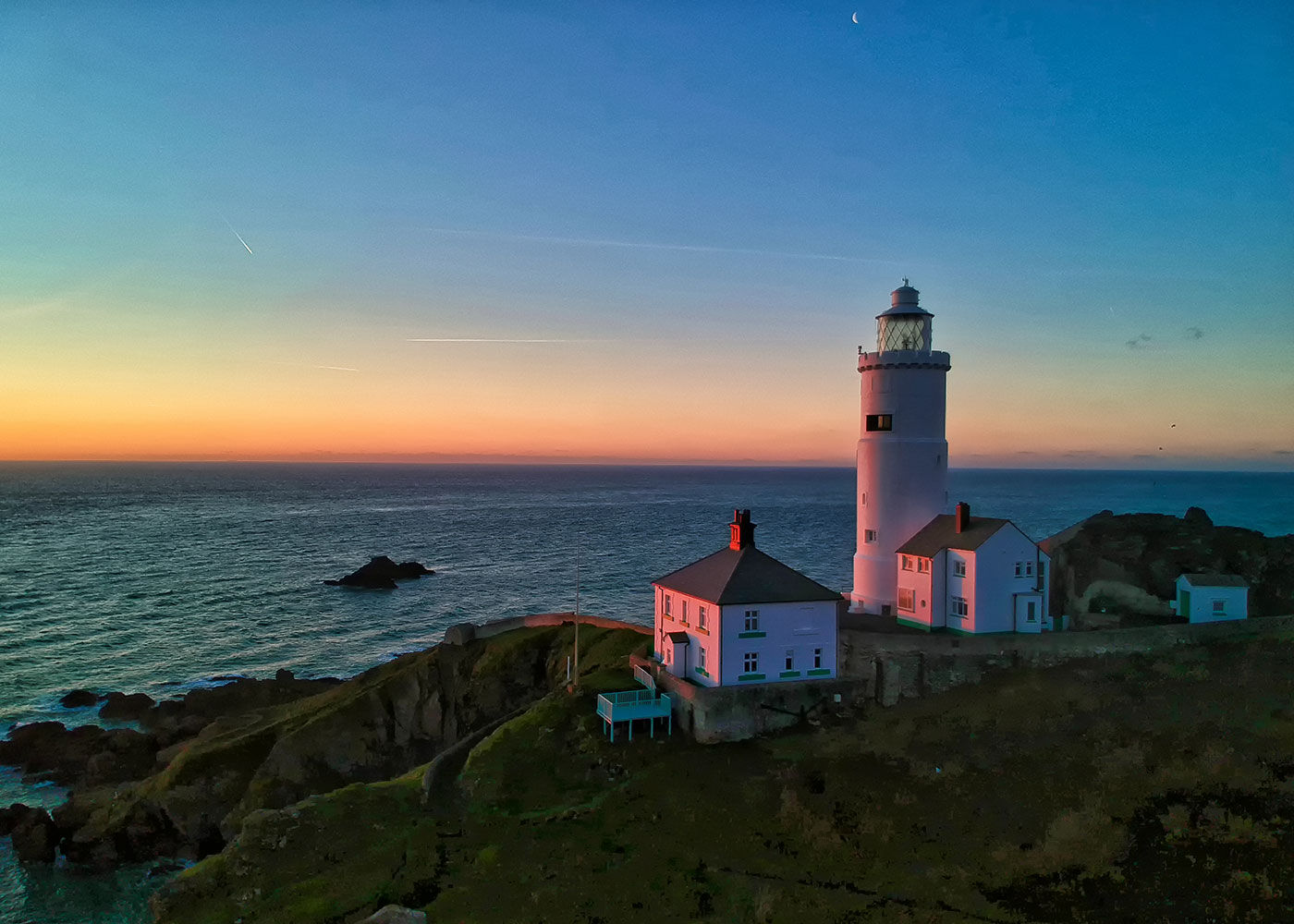 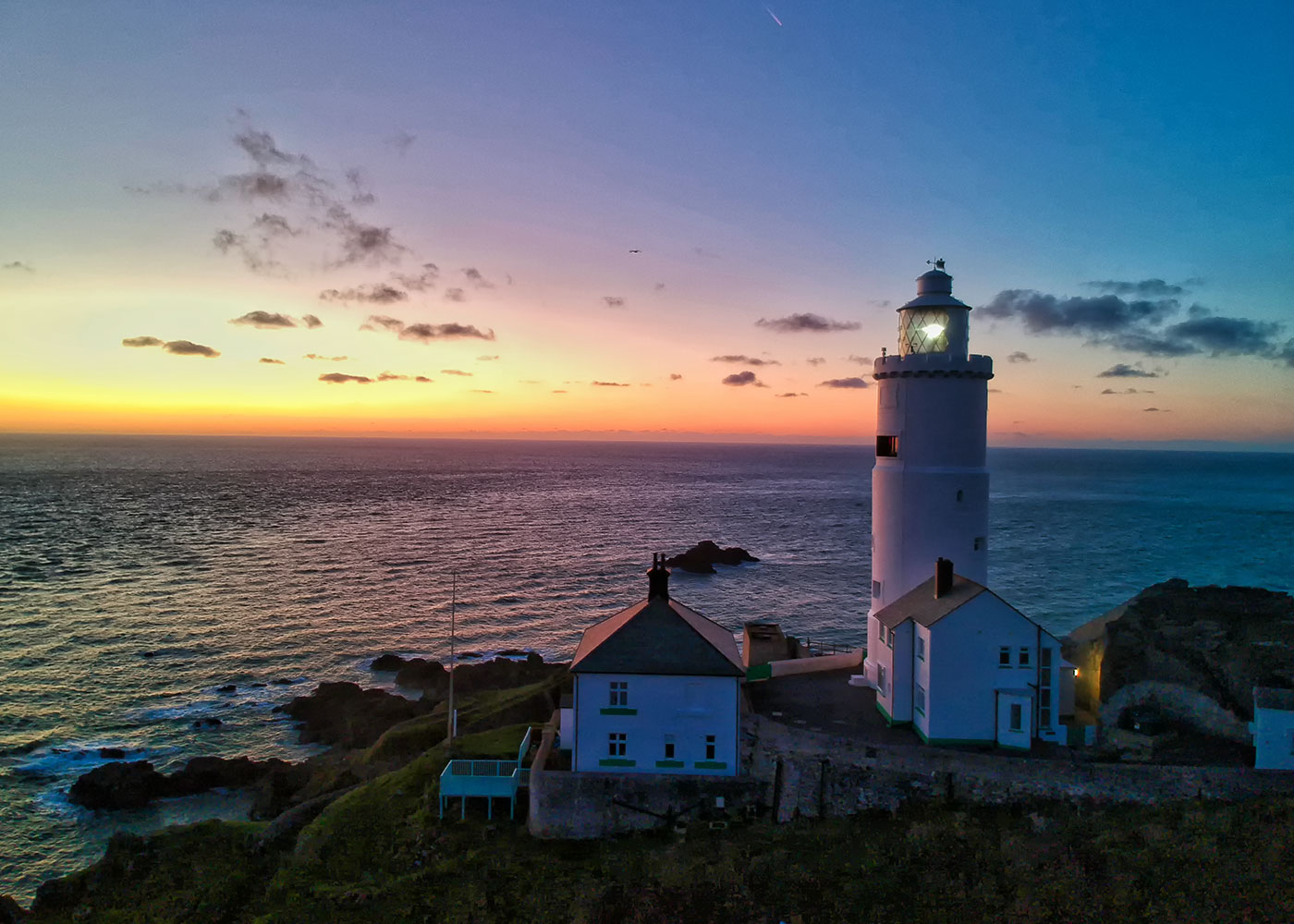 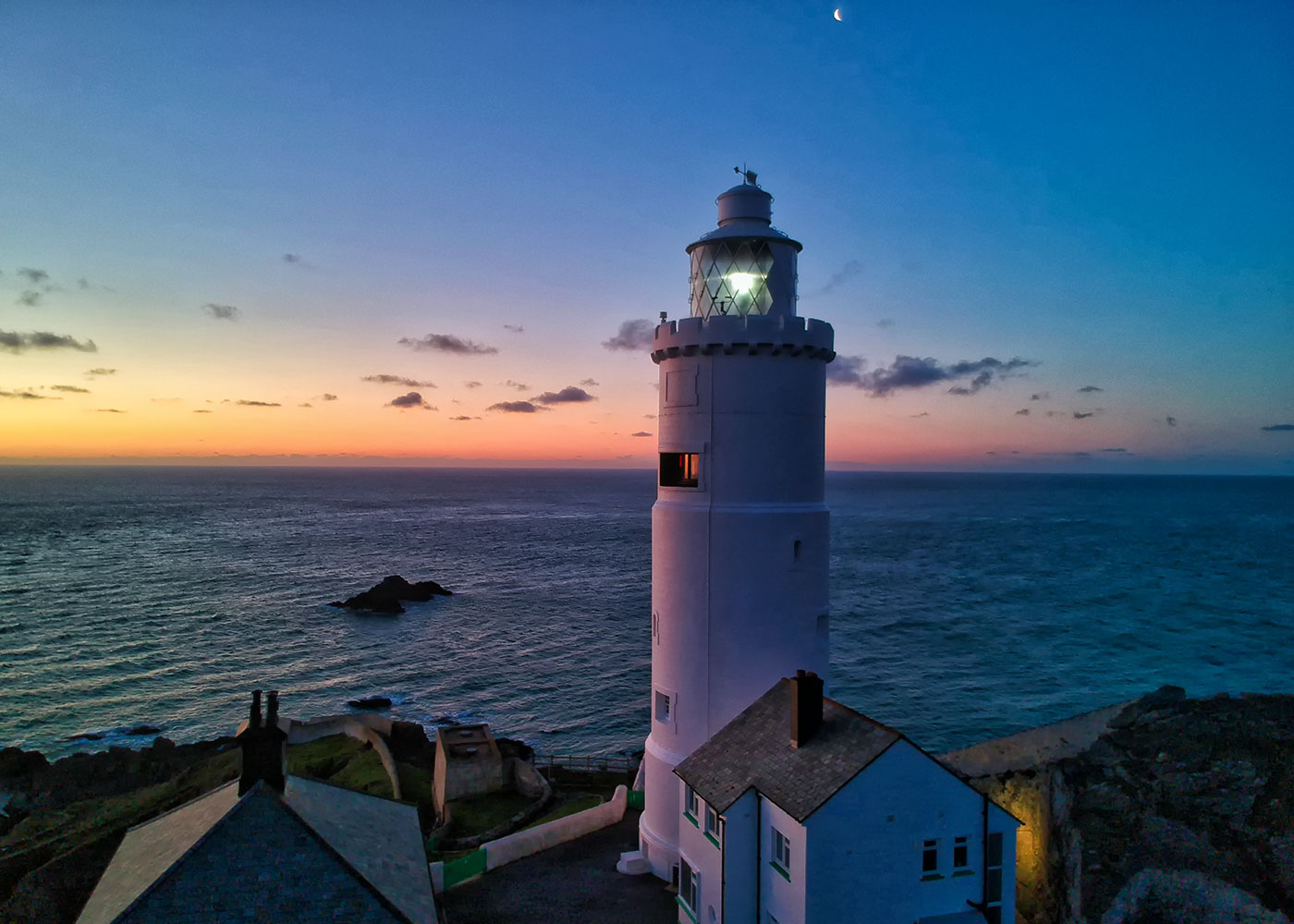 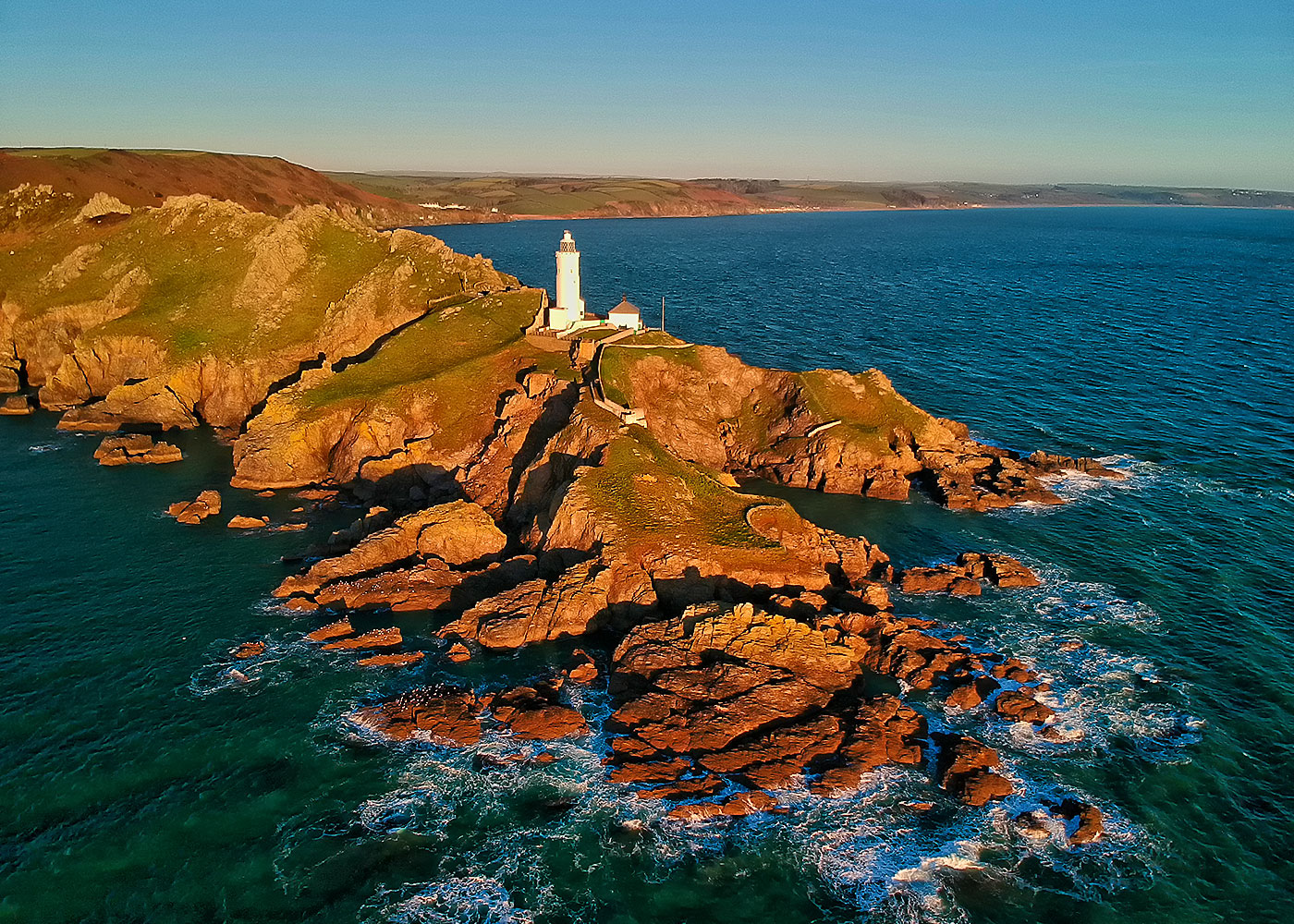 I’d had a handful of opportunities to make this journey beforehand, but the prospect of more sleep had won the battle each time. It may now have been January, but the stars – and more importantly, the weather – had aligned on a rare Sunday free of other responsibilities.

The 5am alarm jolted me from my broken slumber and I toyed with the idea of abandoning the trip yet again. I’d prepared all of my equipment the night before, and peering through the curtains confirmed the positive forecast, with countless stars jostling for celebrity status in the inky black sky only outshone by a thumbnail moon that looked like it could have been made from ice.

Dithering quickly forgotten, I was soon in the car after a quick hit of coffee and carbs. I’d not been sleeping well for one reason or another, so thought the lack of seeming light as I coasted down the motorway was down to tiredness. It was actually down to losing a headlight bulb. But hey, I was on my way. That could wait now.

The motorway section of the journey sailed by, albeit a little on the dark side. I was making good time but was also aware that the following 21 miles consisted of B roads and twisting, narrow country lanes. It….took….for….ever.

At one point on the said twisting country lanes, I genuinely thought I was going to miss the sunrise I’d come all this way to capture. Every turn just revealed another, and the 21 miles from the motorway seemed to countdown in slow motion on my dashboard mounted phone that was throwing night vision Google Maps in my direction.

The horizon was changing from the dark of night to a black / powder blue gradient as the incoming day blended spectacularly, as only the best ingredients do. Finally, and with not a little relief, a final turn found me in the car park destination.

Start Point Lighthouse sits at the end of a peninsula occupying pretty much the most southerly tip of Devon. It has a raised, rocky spine that runs it’s length to the lighthouse, along which snakes a narrow ‘footpath’ – come obstacle course between the rocks. There are more sensible routes to the destination point – a paved service road etc – but where’s the fun in that!?

I imagine the car park here gets pretty busy in high season, but pulling in at just after 7am on a Sunday morning in January, I didn’t struggle for a space. There was just a single other camper van sat there, curtains drawn and occupants probably still sleeping. My constant opening and closing of doors / boot probably changed that as I geared up, but I’m sure they were planning on seeing the sunrise too. Possibly.

Despite the fact I’d actually made it in good time, I think a mixture of the excitement to finally be here, and the want to get an idea of the lay of the land before sunrise, meant I broke out into an unintentionally urgent jog down the access only service road to the lighthouse. This soon splits into a 3 way option to continue on the service road, join the South West Coast Path heading West, or head up and out along the rocky spine of Start Point Peninsula. My destination.

The light was improving all the time, but navigating along the top of the peninsula spine was proving tricky. I’d chosen this route for elevation and advantage point for taking off with the drone, but a combination of the muddy conditions from weeks of relentless rain and the ‘path’ as it was often simply disappearing, meant traversing was a challenge.

At one point, I lost my footing, slipped, and began sliding down the steep slope to my side. My instinct was to grab the closest thing to hand to stop my fall / slide. Unfortunately, this tuned out to be some description of thorned / spiked bush that I still haven’t managed to identify, despite many a Google search. Despite the fact I was wearing gloves (it was COLD!), I immediately felt the multiple puncture wounds to my hand.

Still, I hadn’t fallen down a cliff.

I’d been scanning the possibilities for a launch point as I tried to navigate the rocky path along the spine of Start Point. The stinging feeling in my right hand, and the increasing daylight, meant I was keen to set up sooner rather than later. I found the perfect rocky outcrop – flat platform for takeoff, natural windbreak to my back. Game on.

I reluctantly took off my right hand glove to set up my equipment, not surprisingly met with the sight of multiple bleed points and some protruding thorns / splinters. I pulled the obvious ones out as best I could – the others would bother me for weeks to come, but it would be worth it.

I had the drone in the air pretty quickly. No matter how much planning I do via Google Maps / Earth, I always like to familiarise myself with my surroundings with my first flight at a location – you can’t replicate that in front of a screen at home. My batteries last around 13 minutes each on average and I have 6 of them. It doesn’t sound like a lot, but I’ve honed the process down to try and make the most of the time I have and 13 minutes is usually enough time to cover angles and strategies. Usually.

Happy for the most part with what I had to work with, and with the clearly imminent arrival of the sun above the horizon, I pushed on with the job of shooting, re-composing, shooting, returning to home for a battery change. Rinse and repeat.

It was cold. REALLY cold. I did my best to catch the unfolding scenery from as many angles and perspectives that I could given the time, but through all of that time, I was aware of how lucky I was to be at that spot, at that time.

I’ve been lucky enough to travel to some amazing places prior to my journey with drone photography. I’m always conscious to take in my surroundings both before and after I get to shoot the images that I do, outside of a lens. Some resonate more than others, but this was that all too rare of an occasion where the images capture the sense of wonder and zen I felt when taking the time to view the same vista’s with my own eyes and my own thoughts.

As possibly my favourite of this shoot, I was delighted and genuinely humbled when the below image was chosen by drone manufacturer DJI as their Facebook #DJIShotOfTheWeek.

It also went on to become my best received contribution to date over at 500px. Welcome recognition from some truly inspirational photographers.

Cast Away 🛥 A neglected, ageing boat, on the b

Firewater 🔥 🛶 Sandstone runoff from the cli

Set On Stone 🌅 ⛰ Merry Christmas all. Love a

Splash Down 🌊 ⛰ 🌊 Long exposure over the

Contours ⛰️🌊 Man made path, with a little

Blue Sunday 🌅 🌊 Sunrise over the cliffs and

© DirtyPixel Design
All images © Red Zeppelin. We're flattered that you want a copy of our images, but please help us by buying digital copies via our Shop. We often share a selection of our images for free via our social media channels, so check those out or drop us a message if there's anything we can help with. Thank you ;-)
This website uses cookies to improve your experience. We'll assume you're ok with this, but you can opt-out if you wish. Cookie settingsACCEPT
Privacy & Cookies Policy

This website uses cookies to improve your experience while you navigate through the website. Out of these cookies, the cookies that are categorized as necessary are stored on your browser as they are essential for the working of basic functionalities of the website. We also use third-party cookies that help us analyze and understand how you use this website. These cookies will be stored in your browser only with your consent. You also have the option to opt-out of these cookies. But opting out of some of these cookies may have an effect on your browsing experience.
Necessary Always Enabled
Necessary cookies are absolutely essential for the website to function properly. This category only includes cookies that ensures basic functionalities and security features of the website. These cookies do not store any personal information.
Non-necessary
Any cookies that may not be particularly necessary for the website to function and is used specifically to collect user personal data via analytics, ads, other embedded contents are termed as non-necessary cookies. It is mandatory to procure user consent prior to running these cookies on your website.
SAVE & ACCEPT