This was the very first drone shoot from which I published images to a wider audience online, and the final image below is still one of my favourites.

I’d spent a couple of months practicing with and learning all about my first ‘proper’ drone (the DJI Spark) inside out. I was keen to take the first steps to gaining real world experience and to finally put my learning into practice. This is when my view of the everyday world began to change from not just what I could actually see, but what I might be able to see.

I’d spotted these canola fields on my cycle to work during the early Spring of that year, when I’d decided on a new, longer and more scenic route for Spring and Summer. As the weeks went by, the colours became more and more striking and I began to wonder how they’d look from above. Seeds literally planted. 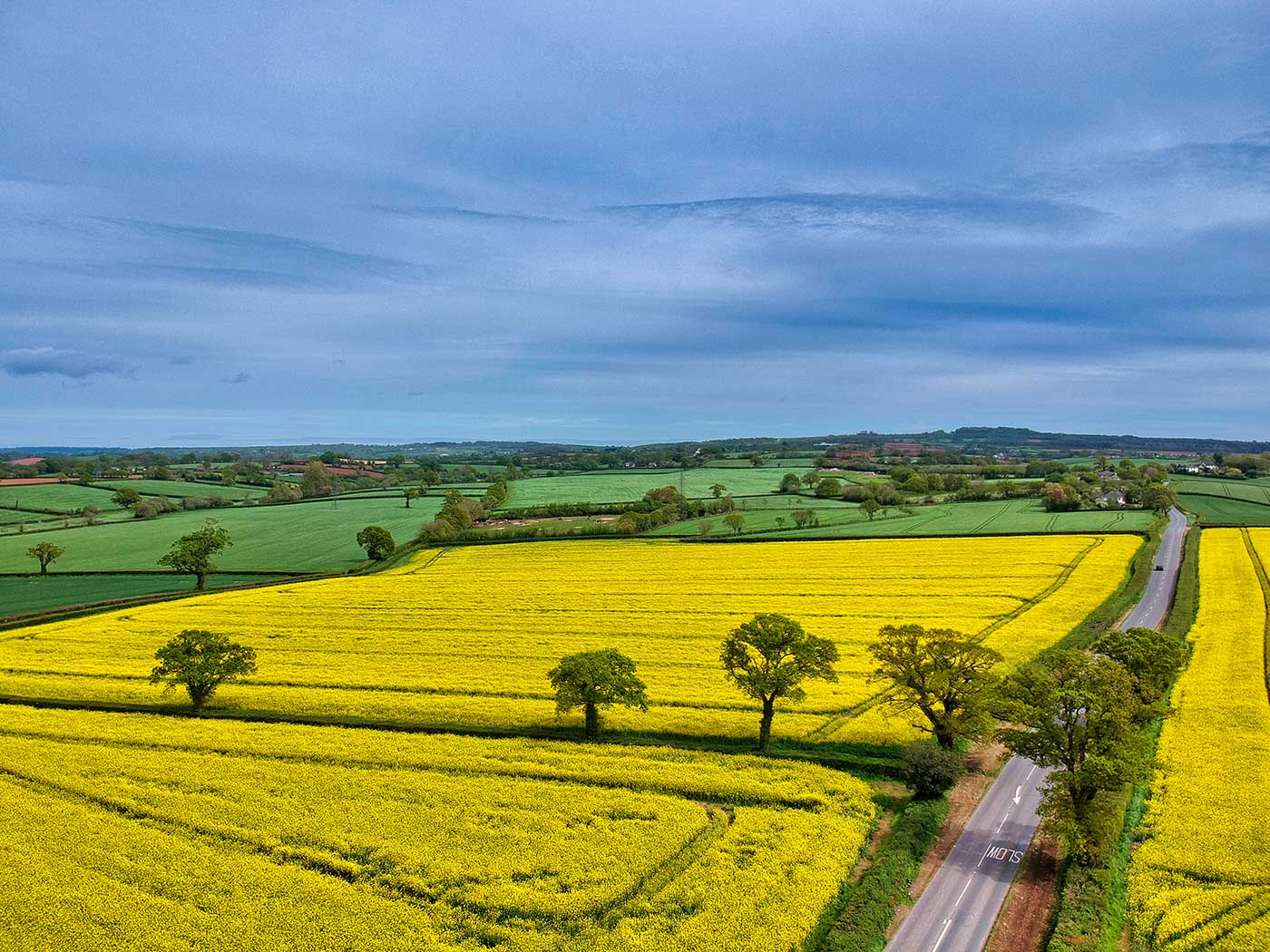 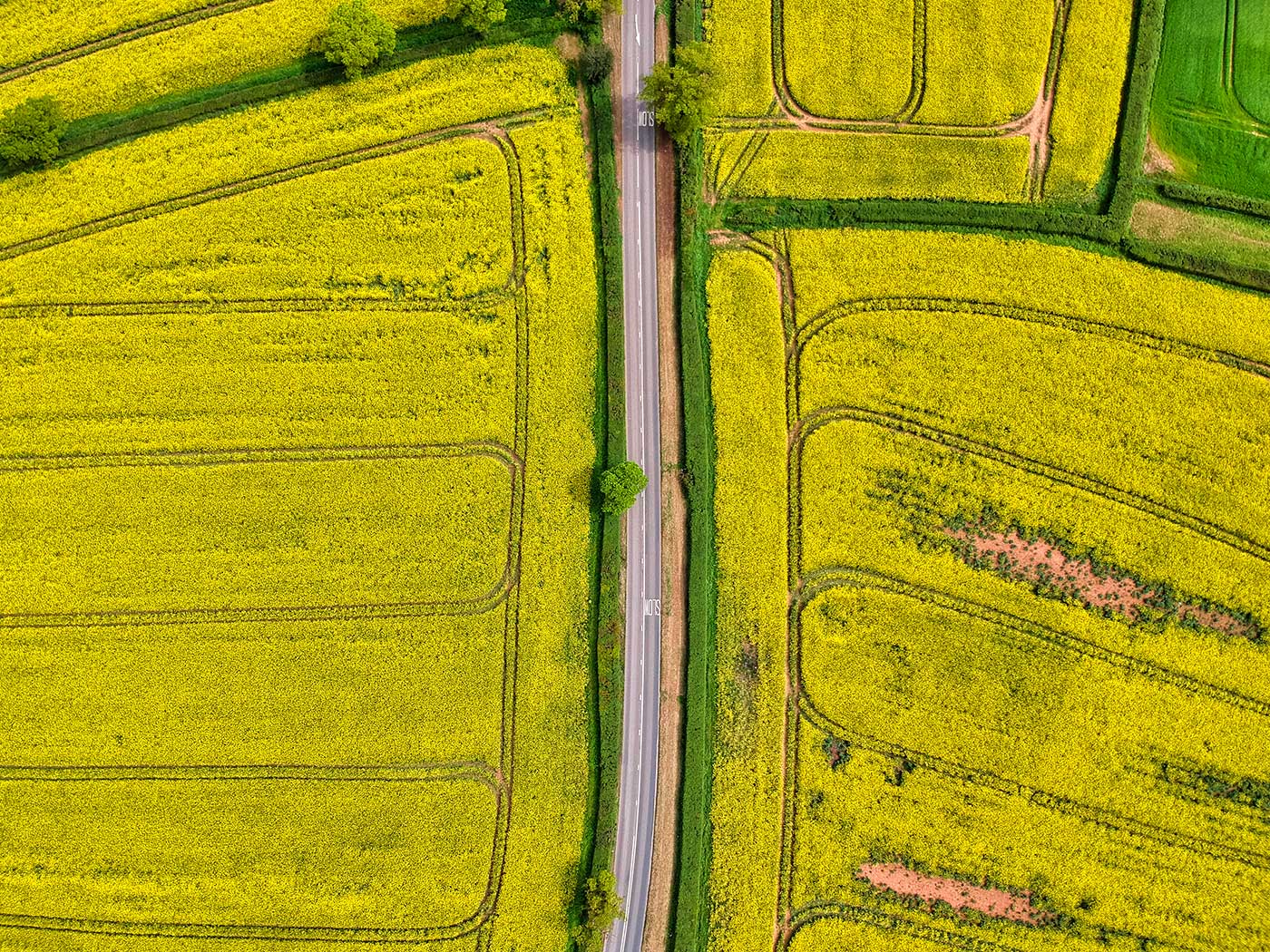 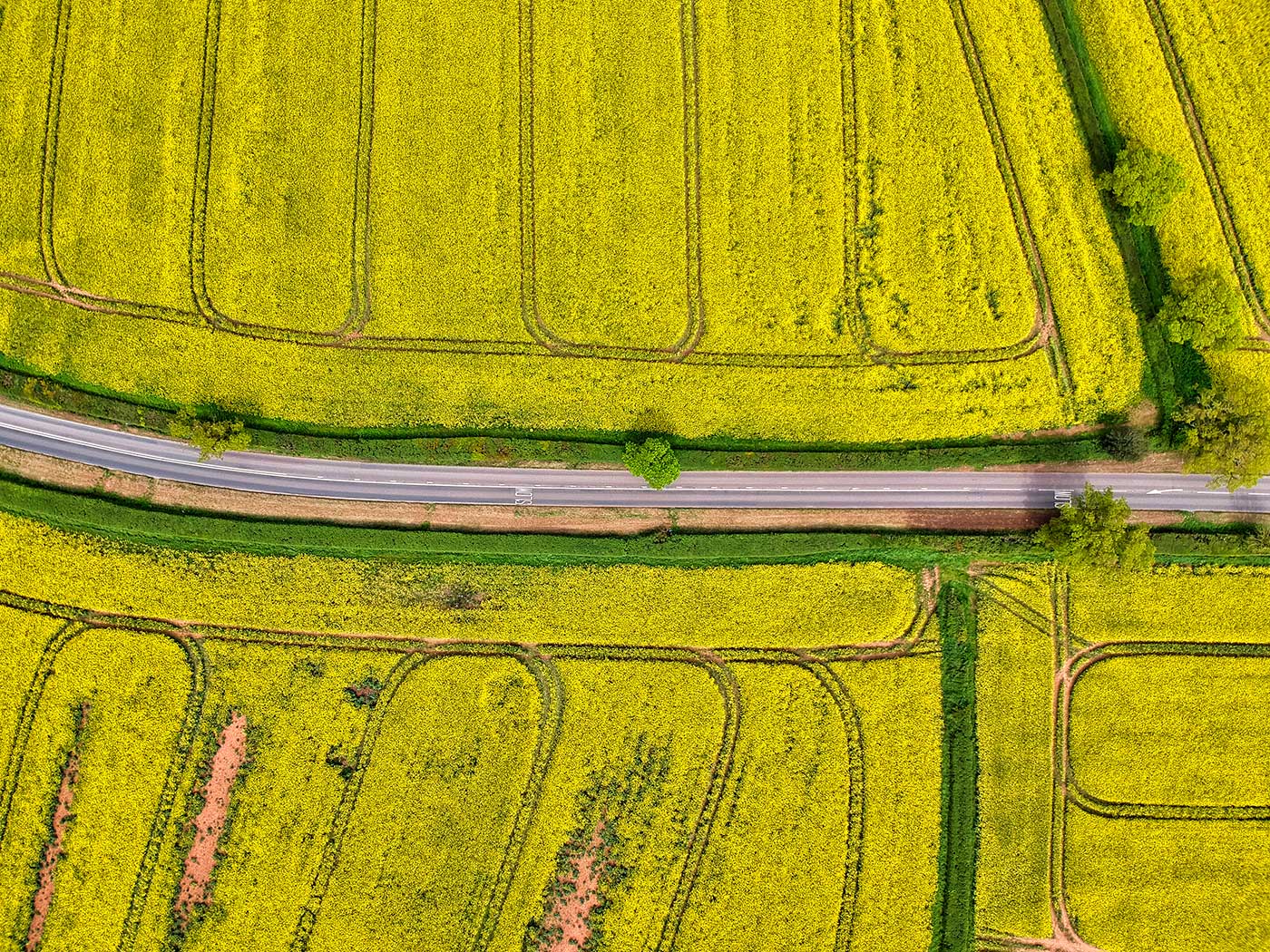 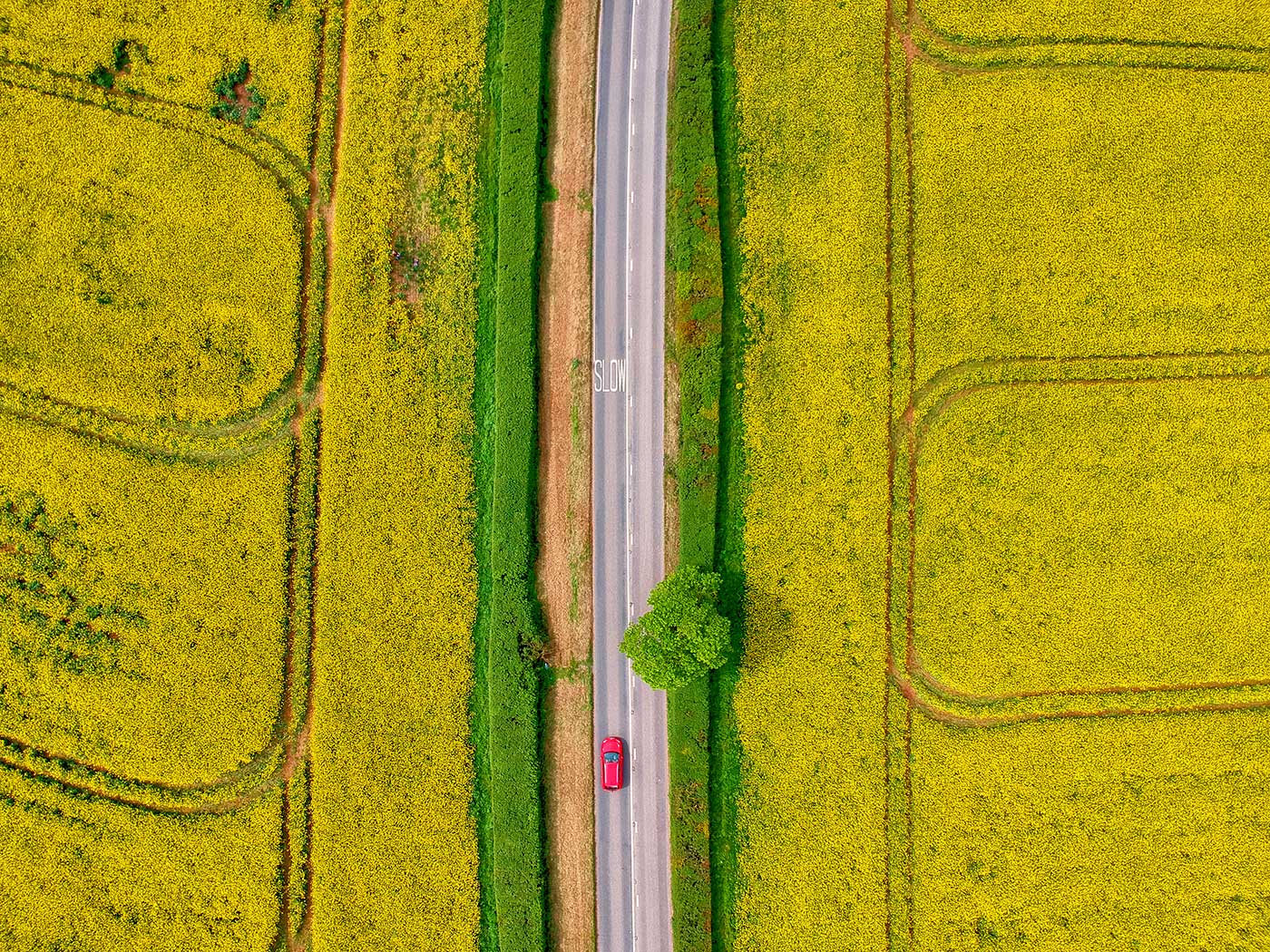 I’d had to wait a number of weeks for both the free time and the weather to offer me an opportunity to see if what I’d been envisaging from the ground would be matched from the air.

As had seemed to be the case during my previous 6 years of living in Devon, the early months of the year had been a combination of rain and fairly dramatic storms / winds. None of these were kind to plans for snapping images from the air.

In an unusual stroke of luck, the day of the shoot came about on an Easter Bank Holiday Monday. With that holiday falling quite late this particular year (why does the Easter holiday move anyway?!), we’d had some unusually good weather, blue skies and temperatures in the low to mid 20°C’s.

I’d spent the morning administering some much needed TLC on my commute bike, which had just been through another bicycle destroying Winter, and as pleasant as it was, we didn’t have the Blue Sky day we’d enjoyed every day since Friday. It was warm, but the sky was milky. Good cycling weather.

As I geared up and threw some lunch and fluid in my my rucksack for my ride, I figured it might be worth packing the drone along just in case. I’ve since learned that if you don’t take it, you don’t have the opportunity to use it. There had been times beforehand where I’d wished I had it, but didn’t. It goes pretty much everywhere with me now.

I set off around midday, with no particular plan of where I was going. We’re lucky here in Devon, in that you can pretty much follow your nose on a bike and end up somewhere truly beautiful without actually trying too hard. Let’s see what happens.

As I mentioned, I didn’t really have a destination in mind when I set off that day.

Prior to owning a drone, my spare time was a combination of my happy place with my daughter, and my ‘what do I do now’ time without her. I’ve always tried to be creative and am fortunate to have turned that in to an occasional hobby / full time job of website and graphic design, but I was free of freelance on this day and looking for something to fill the void.

Despite having lived in the area for close to a year and a half at this point, I’d not really done a lot of exploring of my immediate surroundings. If anyone ever asks me the benefit, both physical and mental, of flying a drone (which nobody really has up to now, but I’m going to share it anyway), I’d point out that I’ve discovered more of where I live in the past year than I did in the previous five.

Free of any schedule, I simply set off, turning my pedals in no particular direction. By luck or design, I found myself heading for the Exe estuary along my new found commute route.

Then I saw yellow. Lots of yellow..

I’m not sure I’d have landed on the opportunity for the shots on this journal page had I not been cycling.

The B3179 here in Devon is a pretty busy arterial road. On any weekday during working hours, and the seasonal holiday chaos on which Devon depends, it’s akin to one of those busy neon aerial highways you might see in Blade Runner. Outside of that, it may as well be in outer space.

In every eventuality, it’s a bit of a nightmare for parking anything other than a cow. Or a bicycle.

With the sun doing it’s best to lance through the clouds, and the canola fields glowing upwards like a buttercup under a sunny youthful chin, I realised now was maybe the chance I’d been looking for.

Finding the perfect open gated access to one of the surrounding fields, I rested my bike on the floor and hiked skirting the green roadside hedge that split the tarmac from the canola. When I was roughly bang-centre of the yellow halo that seemed to spread out forever, I set up in a small clearing and put the drone up in the sky.

Cautiously at first, I slowly went higher, and from taking landscape images to pointing the camera 90° down towards the earth as the details below got smaller and smaller on the viewing screen before me, relaying the live drone view.

At one point, I hit the 400ft ceiling imposed on drones here in the UK and the app screen froze, then reported a disconnect of the drone. My first ever flight of adventure, and I was about to lose a fair investment. My heart sank, and I watched as the tiny spec above me (my drone!) began to drift away. I knew that due to the incredible technology inside of it, the drone should be instigating a return to home (RTH) to the exact point it took off from right next to me, but it seemed to take a lifetime.

Sure enough, after what seemed like forever, the spec above me stopped drifting and began descending until it landed on terrafirma. About 15cm from where I stood. Technology eh?!

Following that, I played it a fair bit safer regards height, but took plenty of images as I tried to frame the shot I was aiming for. The final standout image was one of the last I took as I brought the drone back to earth, rotating it’s axis and taking a burst of 3 images, one of which would capture the red car that I think makes it. Beginners luck.

As mentioned, the below image was one of the last I took on this day.

Pleased with the result, I began submitting this, and subsequently many of my images, to sharing site’s like 500px and Unsplash, where it was selected for the Editorial Feed and went from a few to 100K views within a few days. My portfolio views there now stand at close to 1.5 million.

Cast Away 🛥 A neglected, ageing boat, on the b

Firewater 🔥 🛶 Sandstone runoff from the cli

Set On Stone 🌅 ⛰ Merry Christmas all. Love a

Splash Down 🌊 ⛰ 🌊 Long exposure over the

Contours ⛰️🌊 Man made path, with a little

Blue Sunday 🌅 🌊 Sunrise over the cliffs and

© DirtyPixel Design
All images © Red Zeppelin. We're flattered that you want a copy of our images, but please help us by buying digital copies via our Shop. We often share a selection of our images for free via our social media channels, so check those out or drop us a message if there's anything we can help with. Thank you ;-)
This website uses cookies to improve your experience. We'll assume you're ok with this, but you can opt-out if you wish. Cookie settingsACCEPT
Privacy & Cookies Policy

This website uses cookies to improve your experience while you navigate through the website. Out of these cookies, the cookies that are categorized as necessary are stored on your browser as they are essential for the working of basic functionalities of the website. We also use third-party cookies that help us analyze and understand how you use this website. These cookies will be stored in your browser only with your consent. You also have the option to opt-out of these cookies. But opting out of some of these cookies may have an effect on your browsing experience.
Necessary Always Enabled
Necessary cookies are absolutely essential for the website to function properly. This category only includes cookies that ensures basic functionalities and security features of the website. These cookies do not store any personal information.
Non-necessary
Any cookies that may not be particularly necessary for the website to function and is used specifically to collect user personal data via analytics, ads, other embedded contents are termed as non-necessary cookies. It is mandatory to procure user consent prior to running these cookies on your website.
SAVE & ACCEPT